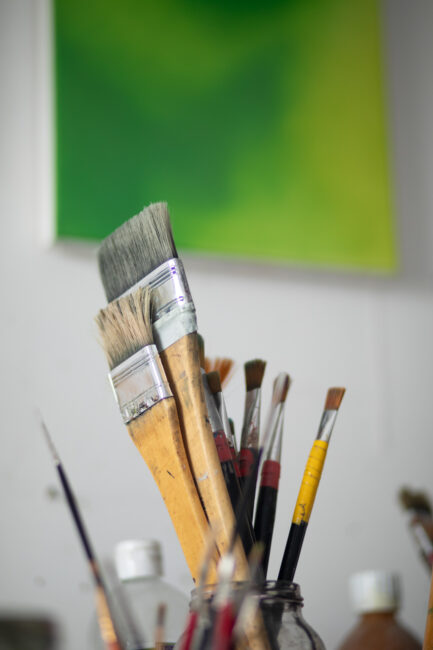 “In the corner of the garden of the old Garter Lane Arts Centre, in the shade of an unlikely palm tree, a marble Buddha statue stood for many decades. Its head, broken from its body, merely balanced on its shoulders, its lidded gaze directed downwards, a long-fingered hand resting on its chest. Mottled with lichen, its graceful lines were camouflaged within the encroaching forest of weeds. Completely unseen was the inscription on the granite base in which it stood: ‘Guadama Buddha 1898. Most assumed it was a garden ornament and while others thought it might be something more, its provenance has been difficult to establish. “This is the story of a 19th-century Burmese Buddha statue and how it may have come to be in Waterford.

The Buddha, a long part of the garden at the original Garter Lane building, was cleaned and restored in 2022. It will be returned to the garden when renovations of the old building are complete. Dr. Abundius d’Abreu, originally from India, practiced medicine in the Waterford Infirmary from 1927 until the late 1960s. He was well known for championing radium treatment for the poor. His connection to the Buddha statue is likely but cannot be confirmed. He is buried in Ballygunner.

Peace, c1970s. Artist: Edward Delaney (1930-2009). Bronze sculpture 186x27x23cm. Purchased from the artist 1979. Location: Theatre Foyer. Delaney (1930–2009) was an Irish sculptor born in Claremorris in County Mayo. His best-known works include the statue of Wolfe Tone and famine memorial at the northeastern corner of St Stephen’s Green in Dublin and the statue of Thomas Davis in College Green, opposite Trinity College Dublin. Redecorating, 1981. Artist: Ernest Ruckle, (1940-2018). Black and white screen print, 66x92cm. Gift of Katherine and Abdul Bulbulia 1986. Location: Garter Lane Administration Building. Ernest Ruckle was born in Neptune, New Jersey, USA, in 1940. He specialized in literary criticism at Rutgers University and became an artist in 1963. He has exhibited in galleries and museums across America and has had ten one-man shows in New York. He lived in Waterford, Ireland from 1986 until his death in May 2018. Indoor People, 1987. Artist: Charles Harper (b. 1943). Watercolour, 55x75cm. Location: Garter Lane Administration Building. Charles Harper was born in Kerry. He attended the National College of Art and Design, the Limerick School of Art, the Dublin Graphic Studio and studied filmmaking in Bonn, Germany. Harper has represented Ireland at numerous Biennials. He is a member of Aosdána and the RHA. White Ben Hennessy, a Waterford artist, had his first solo exhibition in 1981. His work is included in many public and private collections. He is also a theatre designer and director and works frequently with children, most recently with TIAFI (Team International Assistance for Integration) a non-profit Community Centre in Izmir, Turkey that offers support to Syrian refugees. Paul Mosse has exhibited extensively throughout Ireland as well as Europe and America. He has received numerous awards and was elected a member of Aosdána in 2008. His work can be found in many public and private collections in Ireland, Europe, and the USA. This piece was from his exhibition at Garter Lane in 1993.